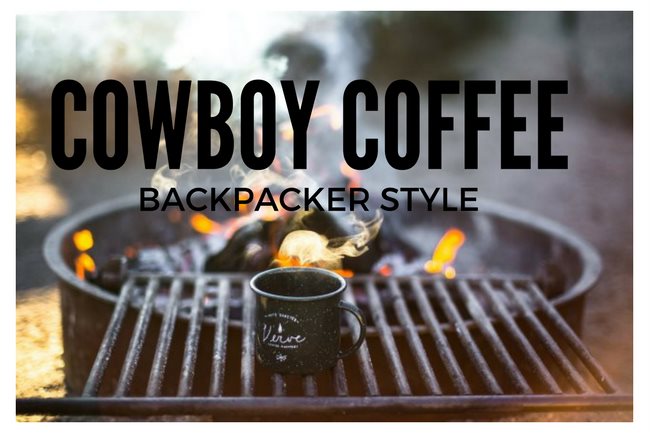 I love cowboy coffee. If not so much for the taste, as for the setting. I do a lot of backpacking. I used to use those coffee bags and then discovered cowboy coffee out of necessity when I couldn’t find the bags in the podunk town General Store near the trailhead. When you figure out how to make cowboy coffee it usually tastes better than the bags. Additionally, I feel OK dumping coffee grounds though always pack the bags out with me.

How Fine to Grind?

The finer you grind the coffee, the faster the flavor will extract from the coffee. If you brew too long, the coffee could taste bitter. The upside is the finer grounds will sink easier at the end of the brew. If you decide to use a more coarse ground to reduce the risk of bitterness and over-extraction, you will need a spoon or something to scrape off the floating ground coffee.

My advice is to start with a drip grind and adjust up or down from there based upon whatever tastes best and works best for you. See our Coffee Grind Chart for a visual explanation. 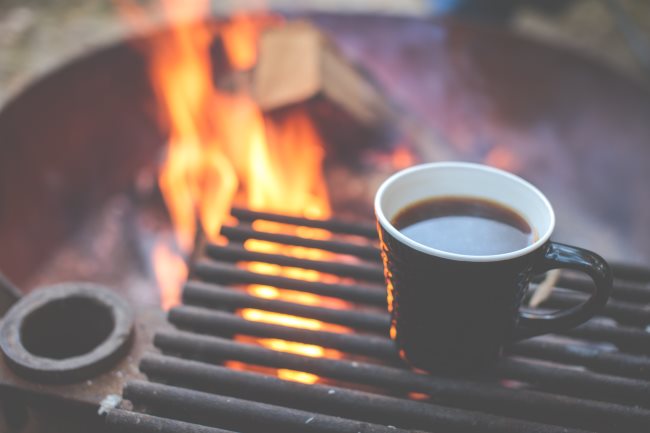 The Keys to Cowboy Coffee

The first key to making decent cowboy coffee is process repetition. Measure the water and the coffee to ensure a consistent ratio every time. I use about 50% more coffee grounds than I do for an equivalent amount of water in my home ADC coffee maker. I live in Albuquerque at 5,000 feet elevation when you hike up above 10,000 feet the boiling temp goes way down and you need to add considerably more coffee grounds. If you live at normal altitudes it’s really not much of a consideration. So measure your water and get it boiling, that’s step one.

Step two is adding the coffee grounds. I like to let it return to a boil for just long enough to get the grounds wet. Be very watchful though as a minute of boiling and the taste goes downhill. The caveat here is elevation; at 10,000 feet boiling for a minute seems OK bitter-wise and necessary to get any flavor at all.

I’ve read about adding cold water to sink the grounds. Grounds sink when they cool. Adding cold water makes cold coffee. I never add water. The grounds usually sink in 5 minutes, quicker if the air is cold. If it’s over say, 70° F, after 5 minutes I take the lid off the pan for 5 seconds, put it back on, and in one minute the grounds will be settled. The fresh air cools the grounds and they fall leaving the rest of the brew as warm as possible.

I carefully select where I’m going to set my pan of coffee. I always make numerous cups. After the 5 minutes of brewing the spot on the ground becomes warm and helps keep the remaining coffee warm. Sand or other soft ground works best, gravelly surfaces are the worst as they let lots of air flow by the bottom of the pan.

Always insulate your pot somehow. Usually, I wrap it in a jacket or clothing though in the winter your sleeping bag works the best. The ultimate is sand. I dig a hole, put my pot of coffee in it and push the sand up around the sides. Dribble a wee little bit of water around the outside of the pan and in 5 minutes when you pull the pot out of the hole the heat and moisture will hold the sand in perfect shape. 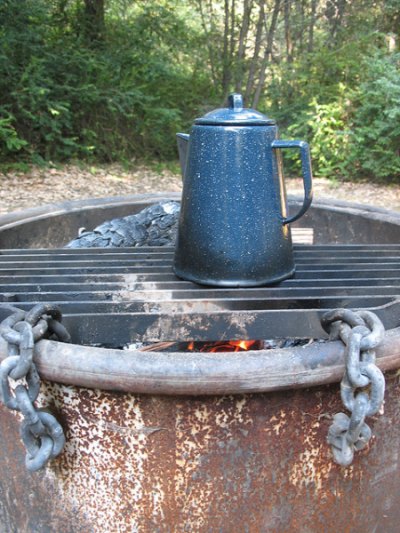 It’s good to set the pot somewhere with a mild slope. This way the grounds settle into the corner of the pan instead of evenly on the bottom. When you pour the coffee handle the pot as gently as possible so as not to disturb the grounds. Best to maintain the slope the pan has been sitting at and pour by tilting in that direction. Hold the cup near the pot, move the pot as little as possible.

Not “Good to the Last Drop”

Just like a finely brewed Turkish blend cowboy coffee is not expected to be good to the last drop. It’s a good habit to learn to throw away the last tablespoon or so of each cup so as to avoid consumption of the bitter solids. Grounds and water fly out of the pot nicely with a flick of the wrist. Distribute evenly over the land. Non-immersed grounds like to stick to the pot and each other. I think scattered single grounds qualify as leave no trace while a big pile of grounds does not. I don’t like to spend any more resources cleaning pots than absolutely necessary.

Percolators on the Trails

I’ve seen all manner of camping coffee devices for sale. I’ve finished my whole pot of coffee while friends were still waiting for their percolator to perk an ever so slightly tastier cup of joe. My method is somewhat simple, requires zero overhead, and has worked wonders for me for five years. I’ve received many compliments on my coffee, normally wow, this is a surprisingly good cup of coffee, usually from the frou-frou coffee-making device set.

Why I Wrote this Article

A few years ago, Outside magazine did an article on backpacking coffee makers. They began with a diss of cowboy coffee; then proceeded to tout all these heavy and expensive devices. I wrote them a letter of complaint and stated that I felt they were trying to sell coffee makers. I suggested that a how-to article on cowboy coffee creation would have been much more appropriate than saying we’ve all had cold, awful cowboy coffee, straining the ground through our teeth. I requested that my gift subscription be canceled in that letter.

I suppose this attempt at an article is my attempt to right that wrong. I’ve never seen an article on making cowboy coffee. Once I got it figured out, I taught my Dad (who has been camping his whole life). Now he’s hooked too. An added bonus is that when I spend the night in a non-coffee drinker’s house I only need to bring some grounds to get my early morning fix.

The Green Verve mug image for this post is by Tim Wright.

Joe Poerschke
Joe Poerschke likes to spend his time exploring the country in his pick up truck. He's brewed coffee in over half the states in the union ranging from Albuquerque to the Arctic Circle in Alaska to Maine, in temps from -15 F to 90 F, and at elevations from sea level to 11,500 feet in the Colorado Rockies. Committed to a pot a day, he usually chooses Maxwell House Rich French Roast, though is no snob and is open to drinking whatever may be available, even if it's Starbucks. When not living large he does contract software engineering in Albuquerque.