You are here: Home / Cafe Culture / The Decaf Diaries 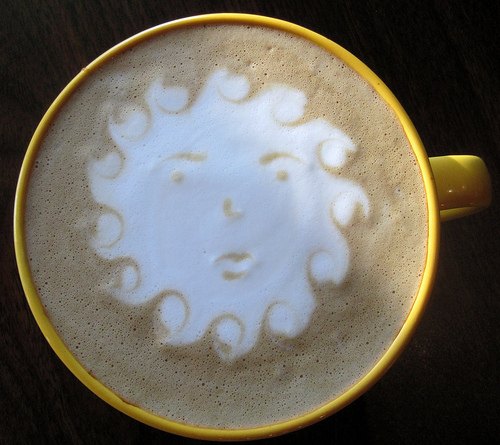 I know, I know. Just get it out of your system. Throw something at me. Yell. Call me names. I deserve it.

If it makes you feel any better, you should know that I’ve been similarly flogging myself for the five years that I’ve been drinking (gasp!) decaffeinated coffee.

It all started when I got pregnant. No coffee is still the conservative approach to that situation, so I, being a nervous first-time-mother, did my duty and laid off my beloved coffee. I somewhat strategically chose to end my affair over my week’s vacation at the beach, thinking that having very few other pressures and certainly no pressing need to be awake would help with the endeavor.

It was still a horrible, horrible week.

I felt like complete garbage. I had a week-long, pulsating headache. I grumbled at everyone. I slept ungodly hours. And I was basically mad for seven days straight.

After that terrible week, though, came all the wonders of being pregnant. During my nine months, I attempted to fill the coffee void by making hot chocolate in the morning – no good, too sweet. Then chai tea with lots of cream – nope, something about the cinnamon wasn’t working for me. Decaf tea? Well, that just plain tastes like bitter twigs.

I would like to emphasize the fact that, for my entire pregnancy, I did not have one cup of coffee. Not one cup of regular coffee, or one cup of decaf. Who drinks decaf? I thought. Only weenies drink decaf.

I’d rather go without, I determined: for forty weeks and two long days.

When we last we met, I was pregnant, abstaining from all coffee-beverages of any kind. And so I spent forty weeks and two days without a single cup from the beautiful bean.

It wasn’t until I had a newborn at home, and I learned what true sleep deprivation means did I rethink the whole coffee thing again.

There was some combination of events that led to my first shameful sip of decaf. I realized I needed some form of artificial stimulation somewhere around baby week 5 – I was flat beat. But I was nursing, and felt strongly that I should avoid too much caffeine. My doctor said that he had been off caffeine for some years now, and that he could get a small buzz from a good cup of decaffeinated espresso. Ah ha, I thought.

Just the word espresso brought vivid happiness to my brain. I recalled my first shot: I was in college, on my way to my Honors Program oral exam. The whole situation was probably as snobby and full of affectation as could be in a small, private liberal arts college, but I loved every minute of it. I was about to sit in front of my Postmodern Philosophy professor: a tall, dark, rail-thin man that just oozed Euro-trash, but was from upstate New York I think. We all loved him. And wanted desperately to impress him. So, on my walk across the gothic campus, I stopped at the coffee stand and said, “Single Espresso. Straight.” I relayed my virginal-espresso experience to my professor before the exam began. I made an A.

So that’s how it started. Far from that Philadelphia campus, I was now a un-caffeinated mother of a one month old. And I desperately needed a little happy drink to keep the raging mommy-monster from destroying my home, my friends, and my sweet baby. So I started drinking decaf. In the morning at my house. And at every coffee shop I could find. And I have to say, those cups of coffee “despite being decaf” made me a much happier mama.

A funny thing happened when I was no longer a new mother and I was finally free to drink a good, strong cup of coffee again. I found myself facing some pretty deep-seeded anxiety. I had visions of that first cup of full-octane coffee. Like motor oil compared to the crap I was drinking.

Because let’s be straight, ladies and gentlemen, decaf tastes terrible. There is absolutely no mistaking decaf coffee from the real thing. None. It has a weird, almost sticky after-taste. I still taste it, after five years. Despite all my rationalizations for why I drink the stuff, please remember, it’s still pretty bad.

But faced with the straight dark roast, I was afraid. I had visions of drinking that first lovely cup, and dropping the white porcelain mug halfway through, as I (in slow motion of course – this is all in my mind, remember) took big leaps toward the bathroom to throw up. Repeatedly.

I also was goaded by the demons from my week of detox. It’s true. I was afraid of how addicted I had been to coffee.

So here I am today. Proud mother of a happy four year old. Still drinking decaf. And averting my eyes as I order my drink from the coffee shop. I slink out the door, clutching my “coffee,” and slipping my sunglasses on as quickly as possible, hoping never to be recognized by any of my philosophy comrades.

So the question remains: why should you read anything I write even though decaf sucks? Because I agree with you. Decaf sucks! And I would know better than anyone – I’ve been drinking the stuff in a variety of states, sampling cups from large and small shops all over the country. It doesn’t even smell as good as the real stuff. (Okay, I may be making that one up, but I can’t be expected to be rational; I drink decaf for god’s sake).

There’s nothing that has been able to take the place of coffee in my life. And for right now, it just has to be decaf. And so here I am, on the front lines. Ready to report, honestly, on the circumstances of decaf beverages “and fellow decaf-drinkers” everywhere. (At least until I summon the courage to face my first strong brew).

Laura K Baker
Laura is a freelance writer, and a mother. She also has a Ph.D. in American literature... and you can bet your double-shot espresso she didn't drink decaf during her grad school years.