You are here: Home / Cafe Culture / Teach A Fish To Make Espresso 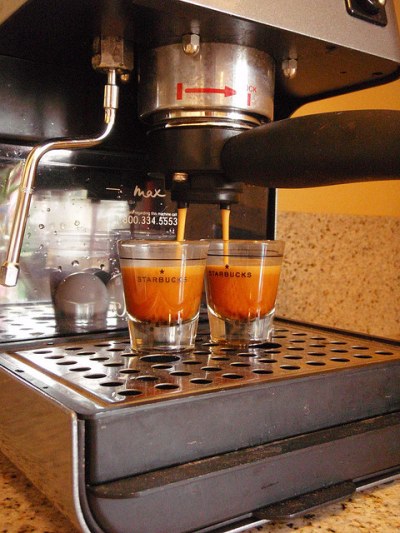 Whether you like or dislike Starbucks, we can all agree they are quite the entrepreneurs. If they can find another way to make a nickel they will. Coffee, ice cream, beer (Red Hook’s Double Black Stout), sugar-filled bottled pseudo coffee, and even a magazine that has nothing to do with coffee (Joe). It’s a classic corporate maneuver. Expand the empire by widening the product line. But, I feel they may have stepped on their own toe in the last year by pushing home espresso machines.

Why would Starbucks sell me a machine that would give me the power to make my own espresso drinks at home? I’m reminded of the old Chinese proverb.

Moving from St. Petersburg, FL to the DC Metro area was a coffee shock. In St. Pete, the nearest quality espresso was either in Tampa or Clearwater. In the DC metro area, there are Starbucks stores everywhere. You can’t go more than 100 feet without running into another Starbucks.

To say I went a little overboard with espresso-based drinks after the move is an understatement. I was spending $30-$50 a week on lattes and espresso at Starbucks. Nothing against the independent shops, but there aren’t very many and the few I’ve been to are more concerned with projecting an attitude instead of producing a quality beverage.

Last winter, Starbucks really started pushing their line of home espresso machines. At first, I was reluctant to consider the purchase, since I’d had a $75 piece of crap Salton machine a few years prior. The Salton made a gritty sludge that resembled the robusta swill served on Miami Beach. After that experience, I was convinced that I’d leave making espresso to the cafes and just make regular coffee at home.

It only made sense for me to buy the Barista, but what I can’t figure out is why Starbucks sold it to me. Here I am one of their best customers, spending $3-$4 every few waking hours and they send me out the door with my own machine! Why would they want to empower the customer? You don’t see Jack Daniels selling home distilling kits.

It’s almost one year later and, without a doubt, Starbucks lost money on me. I’ve gone from buying 2 lattes a day to maybe one a month. I’d like to thank Starbucks and their short-term greed for enabling me to make my own lattes at home; selling the Barista equipment has saved me far more than the price of the machine.