You are here: Home / Cafe Culture / Soy Good, for Decaf 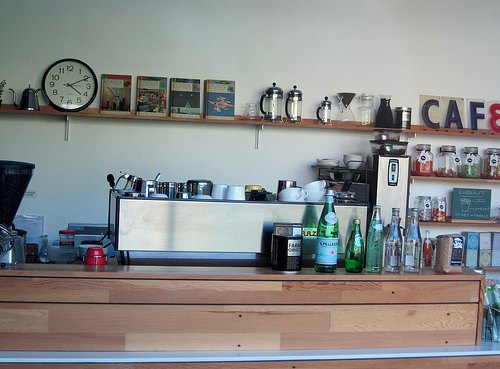 So I happened upon a new form of disguise this weekend. A new method of both up-ing the tastiness of generally blah-to-icky decaf coffee and also hiding a little of the decaf-self-loathing I carry around.

Decaf soy latte. This is my latest strategy to keep the coffee flowing.

In my fully caffeinated coffee days, I enjoyed just as many cups of piping-hot drip coffee as I did specialty drinks. But as a decaf drinker, a straight cup of the stuff is almost more than I can bear. So my drink of choice is the following: decaf mocha with skim milk, and skip the whipped cream. You can see why I am embarrassed when I order. “Why bother?” should be the name of my personal drink.

But the chocolate factor has been quite helpful in making decaf more bearable for me. And, quite honestly, the skim milk is less of a health factor and more of a taste one; I’ve found that skim milk allows the chocolate flavor to be more prominent. The lack of whipped cream is just a personal preference; I don’t really like the stuff, plus, this is a cup of coffee, not an ice cream sundae.

But as I was visiting Atlanta this weekend, I frequented a great little place called Java Monkey, situated in the Decatur square. Their coffee is fair trade, organic, and served up by friendly, knowledgeable baristas, often with surprisingly well-placed piercings and a handy tip or two on the happenings in the area.

For some reason, that particular morning I felt a little less comfortable ordering my overly-specified-yuppy-drink, perhaps because of the very nice, slightly bohemian wait staff. So I pondered how to scale down. A regular latte, I’ve found, really doesn’t hide the gunky feeling often left in my mouth after a sip of decaf. But I thought of my daughter, who drinks exclusively soy milk. Soy milk – hmm.

“Decaf soy latte, for here,” I ordered. I liked the sound of that — it rolled off the tongue much easier, and the barista didn’t seem strained to understand what I wanted. The result was more than I had hoped for: a strong cup of coffee, creamy from the full-fat soy milk, but with a bit of masking, due either to the vanilla flavoring found in many soy milks, or simply from the very particular flavor of soy milk itself.

(At Java Monkey, they are also quite accomplished in creating that cute cream leaf drawn through the top of the latte foam, making the drinking experience all the more pleasant.)

And so, my latest decaf drink of choice is a bit simplified, fairly yummy, and hopefully a step forward in increasing my coffee self-esteem.

Laura K Baker
Laura is a freelance writer, and a mother. She also has a Ph.D. in American literature... and you can bet your double-shot espresso she didn't drink decaf during her grad school years.