You are here: Home / Cafe Culture / Seeing the World One Starbucks at a Time 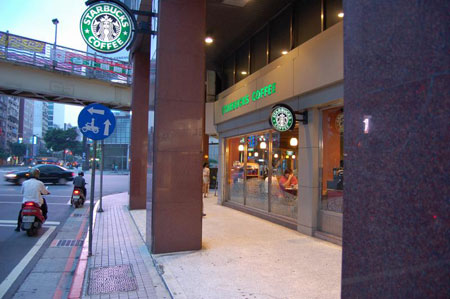 So you think Starbucks has awful coffee, eh? Well, I’m no coffee connoisseur, and I’m certainly not here to tell you Starbucks is the best. I do, however, make the claim that Starbucks’ ubiquity, credited by some for the blandification of America (and the world), has changed my life by giving me the motivation to see and experience much of what this country has to offer. I think first of the landscapes, perhaps because some of the views I have experienced are breathtaking for a city boy from flat, urban Houston.

I have seen forests and mountains, rivers, and wheat-filled plains that I would never otherwise have seen in my “ordinary” life as a computer programmer. In fact, I was never much of a nature person at all, but my travels have led me to appreciate the vast wilderness this country still has (and to lament its ongoing destruction as suburban sprawl blights the land). That’s not to say that I don’t like cities and people–I very much love to see great architecture and funky buildings, small-town Main Streets, and I enjoy the cultural differences that are found all over the land.

My Starbucks travels have allowed me many memorable encounters with all types around the country, and, to a lesser extent, around the world. Though my own personal wackiness makes up much of the humor in the documentary film Starbucking, a goodly number of funny moments stem from my interactions with the people I have encountered during my travels. Ten years later, I shudder to think of how I might have squandered the last decade hanging out in the same shop every night, the same clubs every weekend, the same restaurants, the same old concrete jungle.

Instead, my pursuit of every Starbucks has taken me far afield, to every corner of this great country, and cliched though this might sound, getting there has very often been half, or most, of the fun. Just recently, in fact, I finally had a chance to travel to the Starbucks in Prineville, OR. Now, while it might be an overstatement to say that Prineville is in the middle of nowhere, the town is certainly remote, and far from a bustling metropolis. The fact that the Starbucks closes at the ridiculously early hour of 7:30 PM is proof enough of that. 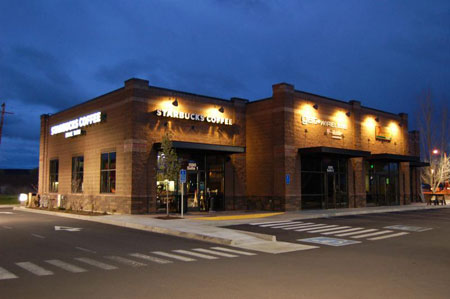 To be sure, I did complain some during the five-hour drive from Boise, ID, especially when stuck behind slow-moving vehicles or when the sharp curves induced a bit of vertigo, but I would have to say that the experience was well worth it for views like this one. 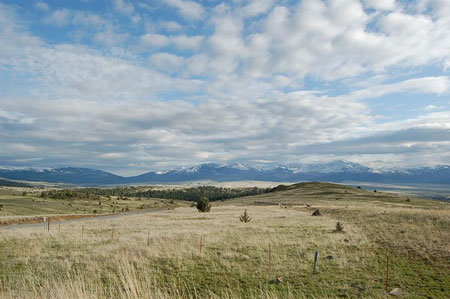 Back in Idaho, near the resort/ski town of Sun Valley, sits a town with the quaint name of Ketchum, and a decidedly Old West look about Main Street. It was a long drive to Ketchum, from Lewiston, through a Native American reservation and several national forests. But it was a scenic journey well worth making (once) and the Starbucks at the end was decidedly out of the ordinary, one of the many examples that prove that no, not all Starbucks look alike. This one in particular was so well-decorated with pieces by a local artist that it had a bit of a gallery feel about it. How many galleries let you sip the joe while perusing the works, I wonder? 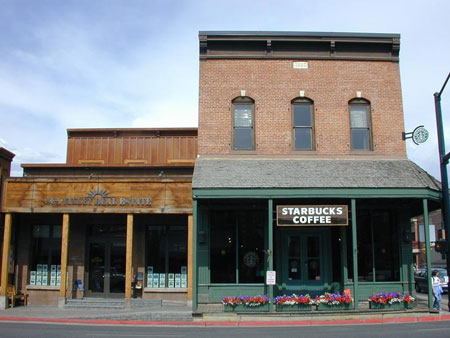 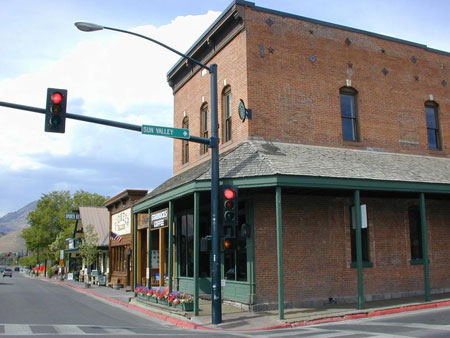 View on the approach to Lewiston from the north. 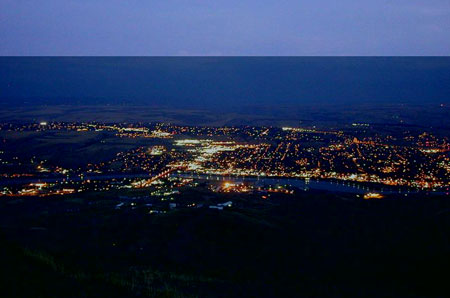 Other unusual routes come to mind, like US-550 from Bernalillo (a suburb of Albuquerque) to Bloomfield/Farmington, then up into Colorado to Durango and Montrose. 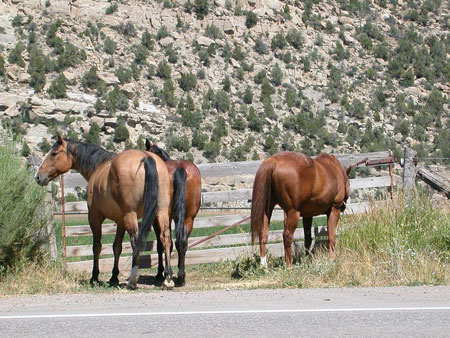 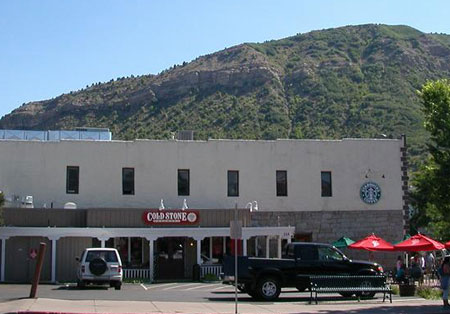 Really, with the way Starbucks is going, the possibilities for travel across this country are endless. And America is more than just mountains and horses of course. In fact, I tend to prefer urban landscapes. The film Starbucking by necessity focuses on the wackier aspects of my travels and gives only glimpses of well-known landmarks like the streets of San Francisco, the ever-astounding New York skyline, or even lesser-known attractions like the pyramid visible on the approach to Memphis. If you could view my memory as a film, you would see great architecture across the country and the world, views from some of the tallest buildings (a favorite interest of mine), or just fascinating images like a sea of scooters crossing a busy intersection in Taiwan. 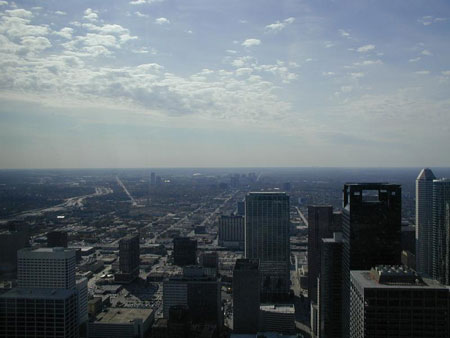 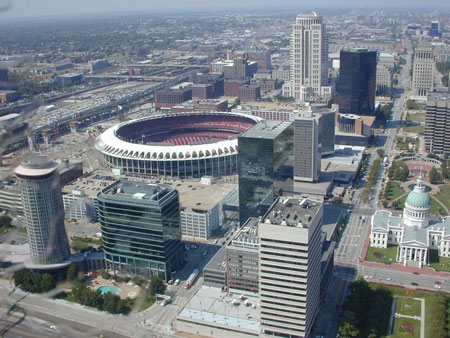 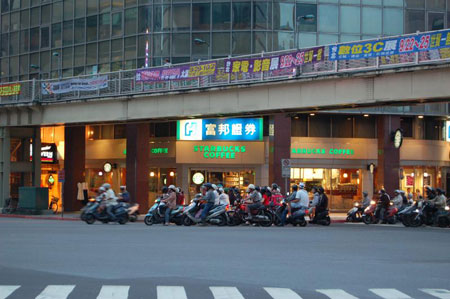 People make up this country as much as the landscape, and every region offers its own unique character. The South, of course, is well known for its food, its accent, and, yes, even Good ol’ Boy cops still stuck in the 60s. We get a little taste of that in the Starbucking DVD, (available now from Heretic Indie Films), from the Alabama motorist whose accent dripped as thick as molasses to the Museum of Pioneer Alabama. And farther down the road, the Slidell cop who didn’t mind making up his own laws in order to get his way. And, though, omitted from the film, my experiences at mom-n-pop restaurants throughout the South, such as Betty’s Cafeteria in Bainbridge, GA, where the staff will gladly sit on your toothbrush (no extra charge). 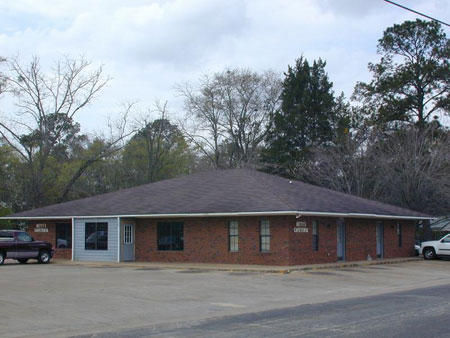 Clear across the continent, Starbucks’ growth is nowhere more evident than in California, where more than a quarter of the Starbucks in North America are located. I visit Cali so often in a vain attempt to keep up that I feel like its urban landscape (much of it a wasteland) is burned into my brain.

One thing I have come to expect is that typically Californian wackiness can be found anywhere, anytime. Take the store in San Pablo where I encountered Kelly, a shaven-headed, well-pierced, possibly indigent, a fan of the almond soy latte. In Starbucking, Kelly states that she finds my travels “sexy” and that she frequents the Starbucks “all the time, dude”. I could never imagine ending my travels and missing out on overcaffeinated encounters like this. 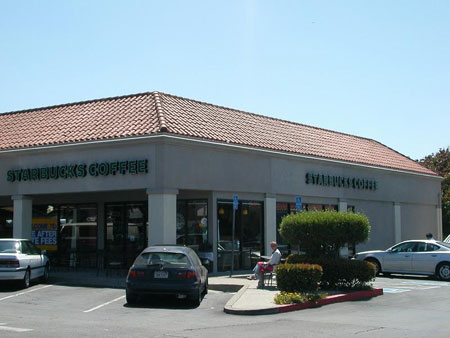 I could go on and on ad infinitum. Ten years of traveling the country have given me more experiences than many will have in a lifetime, combined with the full realization that there is so much more to America than I was motivated to see in my pre-Starbucking days. I take comfort in the fact that, when Homeland Security eventually throws me in Guantanamo, I will be able to draw on an endless sea of memories to keep me warm. To think that, as a young man, I imagined remaining in Texas forever! Horrifying it is, to think that now.

A final note. Yes, it is absolutely true that I could have gone a-traveling without this specific goal in mind–anybody can. But Starbucks gave me the motivation, and sometimes we all need a little push in the right direction. Or in my case, every direction.

Winter
Winter is the person behind Starbucks Everywhere, a web site dedicated to chronicle his lifelong quest to drink coffee from every Starbucks in the world.

Latest posts by Winter (see all)