Elitism and Democracy: Coffee in the Life and Literature of Saul Bellow

The fine line between coffee aficionado and coffee snob is finer than that which divides a perfect espresso from one over-extracted. Coffee lovers may be a truck driver on the highway in need of an invigorating drink or someone with a love for great taste. He/she may be a person who brings a broader knowledge into his/her experience, or a snob who can not believe that others “really” appreciate the nuances of the blend, etc. When one tries to develop his taste and increase his knowledge, he may be viewed by others as a snob.

Coffee is at once the most democratic beverage and one that allows for endless cultivation of individual taste and the chance to achieve excellence. Add to this the social aspect of coffee drinking and you have the makings of a beverage that can serve as a complex social icon. Nobel Laureate Saul Bellow seems to be living in the tension between his admiration of excellence and achievement and his connectedness with humanity as such.

Viennese professor of English Literature, Prof. Kurt Meyer makes a distinction between a modernist “elitist” trend in American literature and a postmodern trend that makes a series of moves toward democratic notions. “You are right,” he wrote me, “in assessing Saul Bellow as straddling the dividing line between the two”. It will not be difficult for us coffee lovers to understand how the motif of coffee can be used to express the tension between elitist trends and more democratic values of basic human experience. This article will show how this happens in the novels and autobiographic thoughts of Bellow when he relates to coffee-a drink he really appreciates.

Bellow and the Culinary Arts

In a New York Times Review of Books article appearing on May 18, 1983, Mimi Sheraton quotes the Nobel Prize winning author as saying: ”I eat in ethnic restaurants in Chicago and at my club, Les Nomades, which has a good French kitchen – maybe the best in the city. It’s a private dining club, but it’s not too hard to become a member.

In this line, we can feel the ambivalence that Bellow feels about catering to his refined taste (best French restaurant in the city) and not wanting to be an elitist removed from the people (private club BUT not too hard to become a member.). We read that “Mr. Bellow likes wine. ‘But I don’t believe in becoming a feinschmecker,’ he said. ‘Most of all I adore good French and Italian cooking, but I’m not willing to endure all of the rudeness one is subjected to in so many fancy restaurants. I hate refined restaurant esthetes – the gourmet bullies who treat you as though you are part of the ugly crowd.'”

Here again, we feel Bellow’s appreciation of quality but his despise for the rudeness of elitist esthetes. He seems to be claiming that the “feinschmeckery” attitude of the refined is actually uncouth. 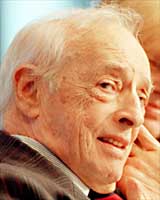 For us Coffee Lovers this stance should be quite familiar. Being particular about wine makes one a feinshcmecker, being particular about a certain Cola means that you are a fanatic but being concerned about coffee-well, could go either way or, hopefully, maybe something else altogether. We will not be surprised that Bellow has specific tastes in coffee as well: “‘I still do the cooking if Alexandra (his wife-mj) is busy and I prepare (tea and) coffee,’ he continued. ‘I’m very particular about both. I never use tap water for either because it’s so awful here in Chicago. I use bottled water…’ The coffee blend Mr. Bellow prefers is a combination of Colombian and Armenian beans that he buys at a local supermarket and grinds just before brewing them in a filter-lined drip coffee pot. ‘Sometimes I make cowboy coffee,’ he said. ‘I put the grounds in a saucepan full of water and just let them come to first boil -the first bubble. Then I let the whole thing settle.'”

Coffee, as we saw above, is part of Bellow’s daily life. He is particular about his favorite blend and grinds his own beans just before brewing. He carefully prepares his cowboy coffee-not letting it boil. This image of a man carefully going through this daily ritual appears in Bellow’s 1970 novel, Mr. Sammler’s Planet (Viking Press, 1970).

“Mr. Sammler ground his coffee in a square box, cranking counterclockwise between long knees. To commonplace actions he brought a special pedantic awkwardness. In Poland, France, England, students, young gentlemen of his time, had been unacquainted with kitchens. Now he did things that cooks and maids had once done. He did them with a certain priestly stiffness. Acknowledgement of social descent. Historical ruin. Transformation of society. It was beyond personal humbling. He had gotten over those ideas during the war in Poland-utterly gotten over all that, especially the idiotic pain of losing class privileges.”

So, grinding one’s own coffee in priest-like motions is a sign of sacrificing the definition of status. Yet it is done with “priest-like stiffness”-perhaps stiff since he was not really used to it, but priest-like, with a religious statue, nonetheless.

As Sammler continues his coffee preparation we see that through the careful use of detail an atmosphere is created that reminds one of a chemist or pharmacist at work. At the same time, it reminds us of the meager existence that is Sammler’s fate. There is no status here; instead, there is careful, professional, and loving preparation of the brew.

“The grounds in the little drawer of the mill he held above the flask. The red coil went deeper, whiter, white. The kinks had tantrums. Beads of water flashed up. Individually the pioneers gracefully went to the surface. Then they all seethed together. He poured in the grounds. In his cup, a lump of sugar, a dusty spoonful of Pream.

Coffee here is the drink of the simple man. It is a common drink that can be prepared in a ritual-like way as a priest or a chemist might tend to their work and it is this care that is exalting even in light of the dusty spoonful of Pream.

In his last novel, Ravelstein, (Viking Press, 2000) Bellow creates a sort of antithesis to Sammler. Coffee is taken at a high-class French Coffee house and its preparation at the home can be an extravaganza! 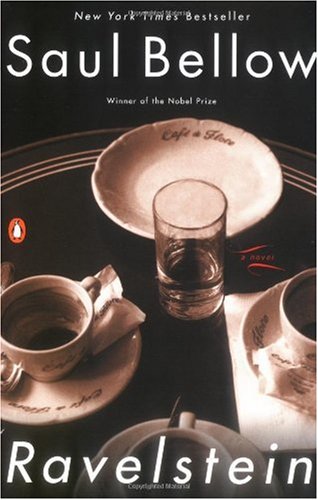 Abe Ravelstein, the intellectual and financially successful professor, has extravagant taste. A scene in the book that is oft-quoted in reviews tells us that, sitting in a French Cafe,

“Abe went for his third espresso serre when the waiter set it down; Ravelstein’s big, unskillful hand gripped the little cup as he carried it to his mouth. I would have given big odds on the outcome if a bet had been offered. Brown stains appeared on the lapel of his new coat. It was unpreventable-a fatality. …’Ah, well,’ he siad, when he at last saw that he had soiled his ($4,500) Lanvin laper. ‘I’ve fucked up again.’ I didn’t laugh at his remark.”

The extravagant Ravelstein, while being a very successful intellectual and “overly well dressed” shows certain signs of being uncouth. Sammler’s unskillful hand carefully ground coffee, and heated water in a flask where the whole operation was “graceful”-although he only had dusty Pream to cap off the cup. Ravelsteins hand turned his espresso serre into a staining agent. As much as Raveltstein loves coffee, he doesn’t seem able to simply enjoy it. In his private home, Ravelstein also combines an extravagant love with a sort of blundering when it comes to basics.

While “Ravelstein could not compete with the collection of Matisses and Chagalls” of his neighbors, “..in the kitchen he went far beyond them. From a restaurant supply company he had bought an espresso machine. It was installed in the kitchen, it dominated the sink, and it steamed and fizzed explosively…The huge commercial machine made the sink unusable. But Ravelstein had no use for sinks-it was only the coffee that mattered.”

Although Ravelstein overdoes it, it does seem that he places the coffee itself at center stage. Yet the narrator (Chick) says, “I refused to drink his coffee because it was made with chlorinated tap water.” (Sounds familiar? see Bellow’s remarks above of how he himself doesn’t use tap water but only bottled water.) It steamed and fizzled, a wonderful show but the coffee was undrinkable due to the fundamental ingredient, water.

The jacket of the Ravelstein shows the Cafe Flore in Paris and may point simultaneously to Abe Ravelstein’s high taste and his need for social contact. Coffee is not just a drink to be prepared and enjoyed according to your personality. Over a cup of coffee, in the right setting, social contacts are developed and thoughts are exchanged.

The importance of coffee in this social setting for Bellow is evident in the quote brought by James Atlas, in his biography of Saul Bellow, Bellow, (Random House, 2000.)

“‘Beranos, the French religious novelist, said that his soul could not bear to be cut off from its kind, and that was shy he did his work in cafes, ‘ Bellows noted enviously: ‘Cafes indeed! I would have kissed the floor of a cafe. There were no cafes in Chicago. There were greasy-spoon cafeterias, one-arm joints, taverns. I never yet heard of a writer who brought his manuscripts into a tavern.'”

Looking back Bellow sounds envious of those who could develop intellectually in an elitist social setting. Ravelstien revels in this type of setting. But Bellow seems a bit critical of the extravagance and lack of proportion that accompanies his protagonist’s reveling. The pleasure of his social setting may lead to seeing the importance of social status rather than real social/human contact is to be developed in that setting. Bellow believes in nurturing taste and expertise but is not willing to let his culture drive a wedge between him and his fellow man, blinding him to the essentials.

Saul Bellow understands the nature of coffee: it is a beverage to be prepared with care to ensure quality taste; a drink that is a process and does more than merely quench your thirst. It is a drink that can elevate the individual while keeping him in touch with the essentials of this world. Coffee is a drink that leaves various marks as part of our daily ritual whether you live in high style like Ravelstien or have a makeshift kitchen in a one-room apartment like Sammler. Bellow seems to understand the enticement of “sophistication” and of forever advancing with the ritual of coffee. But, more so, he realizes that true refinement means remaining rooted in the basics.

In this sense, Mr. Bellow is a midwesterner through and through. As Hywel Williams notes in his November 18, 2000 review of Atlas’ book in “The Guardian”

“It [Chicago] was his kind of town, if only because it wasn’t New York. Bellow has always needed his willed sense of exclusion. Chicago was mid-western, raw and heterodox, where New York was too obviously sophisticated. The local university was no Ivy League conspiracy of gentlemen whose highest cultural aspiration was to join Eliot and James on the boat back to the old country. Chicago alone could nurture Bellow’s mythic sense of the American writer’s selfhood.” 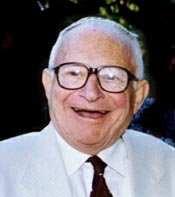 With thanks to my dear friend Nathan Szajnberg, who walked the Quandrangle with me and studied with Bellow, while I did other things.