You are here: Home / Coffee and Health / No Coffee or Tea For At Least 2 Weeks 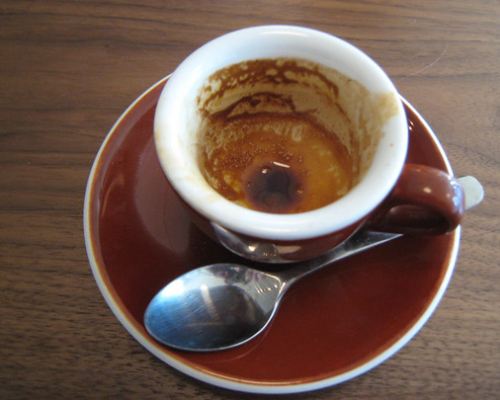 My new dentist then turned to me and said something I’ll never forget.

No coffee or tea for at least two weeks.

You need to avoid coffee or tea for at least the next two weeks. If you do have coffee, you must drink it using a straw.

I messed up. I messed up bad. A few weeks ago I got a direct mail advertisement for a dentist offering new patients a free Zoom! teeth whitening with the purchase of a cleaning and X-rays. Now that I’ve moved to the Seattle area, I needed a new dentist. I saw the Zoom! machine on Extreme Makeover and my favorite word is free. What could go wrong?

I didn’t ask any questions or do any research. It was only after the procedure that I learned about the coffee and tea restrictions. Drinking coffee or tea after tooth bleaching can cause staining. The dentist was a little shocked that I left in a state of panic wondering how I could drink espresso through a straw. Soon I would find out.

The Zoom! Whitening procedure lasted almost an hour. After prepping the teeth, a bright light is focused on the teeth. Not exactly laser teeth whitening, but a cool technology. Oh, and did I mention the cost was free? According to the official site:

…Hydrogen Peroxide is broken down, oxygen enters the enamel and dentin, bleaching colored substances while the structure of the tooth is unchanged. The Zoom! light aids in activating the hydrogen peroxide and helps it penetrate the surface of the tooth.

The procedure does cause some tingling with periods of sharp shooting pain. The price of beauty. My hunch was living with teeth sensitivity would be less traumatic than living with coffee restrictions.

The first morning I pulled a shot of my latest espresso blend. Then I did the unthinkable. I dropped a straw into the demitasse and started sipping. Maybe my TV memory is a little fuzzy, but I don’t recall ever seeing anyone on Extreme Makeover drinking espresso through a straw. It was less than a satisfactory experience.

The Longest Two Weeks Ever

Having just moved to Seattle, I was in espresso heaven. The legends are true. Seattle has the best coffee of any place I’ve ever been to. Carrying a straw into some of the world’s top coffee houses was not an option. I’d have to figure out a compromise.

My coffee schedule was not going to make it easy for me to avoid coffee. I was enrolled in a four-part coffee cupping class at Victrola Coffee Roasters and I also scored a ticket to Coffee Fest. This means not just a lot of espresso, but a lot of excellent espressos. The straw idea was too silly, so I developed my own technique for sipping espresso that gets almost no coffee on the teeth. Tilt head back, round tongue, and pour. It needs to be a little cooler in temperature.

At one of the coffee cuppings, my class sampled the five different beans that made up the Victrola Streamline Blend as individual espresso shots, and then we sampled the espresso blend itself. The exercise was to isolate the different flavors inside the blend. Since this was a cupping and most mortals probably shouldn’t drink six shots of espresso in an hour, they advise spitting the espresso into a cup.

The tilt technique that I had perfected minimized the amount of coffee that touched my teeth. Spitting out the espresso would guarantee the espresso would coat my teeth on the exit. Not an option. Plus the espresso was too tasty not to be fully enjoyed. Six espressos later and my teeth were still white as the driven snow. My heart was racing as I had just run a 100-meter dash, but I looked good.

Well with the exception of the first day, I didn’t drink my espresso using a straw during those two weeks. I didn’t even cut back on my coffee intake. In fact, I probably ended up consuming more. My tilt technique wasn’t perfect and I did develop some slight coffee staining. In the end, my teeth ended up just slightly whiter than before.

If I had to do it again, I would schedule the Zoom! whitening during the summer (or use the Crest 3D strips) and instead drink iced lattes with a straw. And I would confirm Coffee Fest was not in town those two weeks.