You are here: Home / Coffee and Health / How Coffee Can Help You Attain Fitness and Weight Loss 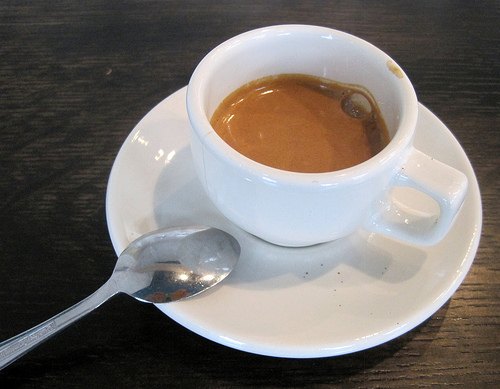 What’s the first thing over 100 million Americans do when they wake up? If you’re one of the many java-addicted consumers, you probably make a beeline for the coffee brewer and with your eyes half-open, brew up a fresh cup of the aromatic brown elixir. Now despite the rumors that have circulated from Boston to Beijing, coffee is actually a healthy beverage that is consumed by billions around the world. Certainly, if you take a common-sense approach to whether coffee is safe (or not), it would be perverse to withhold the provisional assent that it is indeed safe considering that billions of individuals drink it every day.

Furthermore, the key ingredient in coffee, caffeine is actually an amazing substance that has a wide variety of functions. For instance, caffeine improves performance and endurance during prolonged, exhaustive exercise. But it also promotes gains in short-term, high-intensity athletic performance. Caffeine decreases your perception of pain during exercise. This might explain why fitness competitors routinely down a cup of java right before exercise. Caffeine also improves mental alertness and reduces your perception of fatigue. Moreover, habitual intake does decrease caffeine’s ergogenic properties.

And you might be surprised to hear that coffee itself may be a health food. For instance, we know that regular consumption of coffee decreases the risk of type II diabetes. A recent study examined the long-term relationship between coffee consumption and other caffeinated beverages and incidence of type 2 diabetes mellitus: The Nurses’ Health Study and Health Professionals Follow-up Study.

Scientists tracked 41,934 men from 1986 to 1998 and 84,276 women from 1980 to 1998. These were free of diabetes, cancer, or cardiovascular disease at baseline. Coffee consumption was assessed every 2 to 4 years through validated questionnaires. What did they find?

These investigators documented 1333 new cases of type 2 diabetes in men and 4085 new cases in women. The authors found an inverse association between coffee intake and type 2 diabetes after adjustment for age, body mass index, and other risk factors. In other words, those who drank the most coffee tended to have the least risk of diabetes. Even more intriguing, total caffeine intake from coffee and other sources was associated with a statistically significantly lower risk for diabetes in both men and women; meaning that decaffeinated coffee may not be as good for you as the caffeine-filled. The author’s concluded that the “data suggest that long-term coffee consumption is associated with a statistically significantly lower risk for type 2 diabetes.”(1)

Perhaps the most common reason for ingesting caffeine or caffeine-containing beverages is the pick-me-up effect. For instance, one study examined one hundred and forty-four volunteers (72 male, 72 female, mean age 21 years) and had them consume breakfast (cereal versus no breakfast) and caffeine (caffeinated versus decaffeinated coffee). They found that those who consumed breakfast cereal had a more positive mood at the start of the test sessions, performed better on a spatial memory task, and felt calmer at the end of the test session than those in the no breakfast condition (lesson: don’t skip breakfast:)). Consuming caffeine improved the “encoding of new information and counteracted the fatigue that developed over the test session.”(2)

Caffeine is the most versatile and effective ergogenic aid (i.e. something that enhances exercise performance). A prominent exercise physiologist, David Costill, Ph.D., performed the ground-breaking study on caffeine and exercise 26 years ago! He took nine competitive cyclists (two females and seven males) and had them bike until exhaustion at 80% of V02 max. (Note: V02 max, also known as maximal oxygen uptake, is a measure of how well your cardiopulmonary system functions).

Each subject consumed coffee containing 330 mg of caffeine 60 min before the exercise or a placebo (decaffeinated coffee). Following the ingestion of caffeine, the subjects were able to perform an average of 90 minutes of cycling as compared to an average of 76 minutes in the placebo trial. This reflects an 18% increase! They also found that subjects burned more fat (aka lipolysis) as shown by measurements of plasma-free fatty acids, glycerol, and respiratory exchange ratios. In fact, fat oxidation or burning was significantly higher (107% greater) during the caffeine trial (118 g or 1.31 g/min) than in the placebo trial (57 g or 0.75 g/min). Also, the perception of effort was much less in subjects after consuming subjects indicating that exercise felt easier.(3)

Other research has confirmed the performance-enhancing effects of caffeine.(4-7)

A recent study looked at energy expenditure, fat oxidation or burning, and norepinephrine (NE) kinetics (i.e. how ‘adrenaline-like hormones are metabolized) after caffeine or placebo ingestion using placebo-controlled double-blind conditions. The dose administered was 5 mg of caffeine per kilogram of fat-free mass (which is mainly muscle and bone). Translation: For the young men, they consumed about 350 mg while the old men consumed about 295 mg. (Therefore, the young men had more FFM than the old men).

They studied 10 older (65-80 yr) and 10 younger (19-26 yr) men who were moderate consumers of caffeine. Caffeine ingestion resulted in similar increases in both the old and young men for plasma caffeine levels; thus both young and old absorb caffeine equally well. Metabolic rate or energy expenditure increased similarly by 11% in young and 9.5% in the older men. According to the scientists, “older and younger men show a similar thermogenic response to caffeine ingestion, whereas older men show a smaller increase in fatty acid availability after a caffeine challenge. These metabolic differences are not related to alterations in norepinephrine kinetics or fat oxidation.” (8) A recent study presented at the International Society of Sports Nutrition Conference in Las Vegas showed that a functional coffee beverage that also contained bitter orange, hydroxycitric acid, and chromium produced a significant increase (up to 30%) in metabolic rate. (9) This particular study is the first presented on ‘functional coffee’ (i.e. coffee with added nutraceuticals).

The Judgement on Java

Clearly, consuming coffee or caffeine can have a myriad of health benefits ranging from the increased mental and physical performance, enhanced lipolysis or fat burning, to an improvement in health (e.g. decreased risk of type 2 diabetes). With the advent of functional coffee (i.e. nutraceuticals added to coffee to enhance its health benefits), the future of java is indeed bright.

Jose Antonio PhD
Jose Antonio, Ph.D., CSCS, FASCM is a leading research advocate in the field of performance nutrition. He is the Chief Executive Officer of the International Society of Sports Nutrition, the only academic society dedicated to promoting the science and practice of sports nutrition. Currently he is the Chief Science Officer of Javalution Coffee Company. He has published over 40 peer-reviewed scientific papers and has written 6 books in the field of sports nutrition and exercise. Dr. Antonio earned a Ph.D. and completed a postdoctoral fellowship at the University of Texas Southwestern Medical Center in Dallas Texas.