You are here: Home / Coffee Business / Housing and the Coffee Shop Economic Indicator 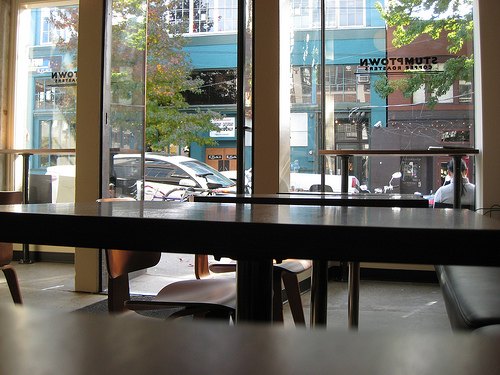 Back in January of this year, Herb Greenberg made headlines by discovering a new leading economic indicator at his favorite Chinese restaurant. He called it the Hot-and-Sour soup indicator, apparently named after his favorite menu item. Herb is a regular at the Chinese restaurants near his San Diego home and the local staff was not shy about reporting the dramatic economic slowdown in Hong Kong and China, well before the Asian slowdown was reported by the official media.

The hot and sour soup is a leading economic indicator direct from the U.S.-based relatives of the Hong Kong and Chinese citizens feeling the pain of their regions slowdown. Herb went on to compare the hot and sour soup indicator to the official rear view mirror indicators released by the government, calling the former at least as credible.

In honor of Herb’s findings, I will now release my findings on the coffee shop housing bubble indicator. Back in 2006 at the height of the housing bubble, it was impossible to walk into a coffee shop in the high flying bubble areas – California or Seattle – and NOT hear people raving about how much money they were making on their houses. Those conversations occurred in 2005 and 2007 of course, but the peak of the coffee shop real estate wealth conversations occurred in 2006 by my very scientific calculations. And that peak corresponded precisely to the peak of the national housing bubble.

Today if I walk into any coffee shop in Seattle and listen (eavesdrop) attentively, I hear mixed signals from the coffee shop indicator. While some conversations point to worry over the value of houses, others are convinced their house is still appreciating. In terms of economic forecasting, I would say we are still well above the bottom of the housing bubble, despite the National Association of Realtors’ claims to the contrary.

The coffee shop housing indicator does not lie, and we will not truly be at the bottom until the peak of the coffee shop conversations relate to housing wealth deterioration across the country. I’ll be sure to let everyone know the precise moment in time when that happens, and it’s safe to buy your new dream home. Don’t hold your breath waiting as the housing pain has just started in some parts of the country (Seattle) and will likely last several years to come.