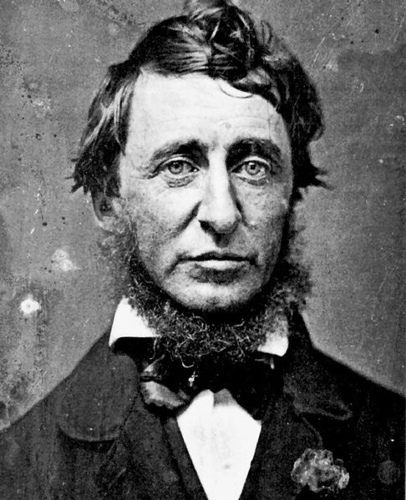 Imagine retreating to nature, embarking on a journey in living simply, confronting only life’s essentials. You’d be forced to bring only the barest of necessities, and debate what few belongings you simply couldn’t live without.

Do You Need Coffee?

If you think that Henry David Thoreau never pondered the significance of coffee during his famed stay at Walden Pond, think again. Historians agree that when Thoreau moved into his Walden home in 1845, there were not yet any Starbucks franchises in Concord, Massachusetts. Yet coffee makes a surprising number of appearances in Walden, and Thoreau has plenty to say on the subject. Many of his Concord neighbors were drinking it, and today’s coffee lover might be surprised how familiar a role coffee played in the lives of Concordians a century and a half ago.

Contrary to popular belief, Thoreau was not a hermit at his Walden home. Visitors were welcome, and indeed a chapter of the book is devoted to the (mostly human) visitors he had. There is an oft-alluded to Canadian woodchopper who visited frequently, a man of humble means, who had a noticeable fondness for coffee.

He was cast in the coarsest mould; a stout but sluggish body, yet gracefully carried, with a thick sunburnt neck, dark bushy hair, and dull sleepy blue eyes, which were occasionally lit up with expression,” says Thoreau of the woodchopper (who is unnamed in Walden, although Thoreau scholars are confident that his name was Alek Therien. “He wore a flat gray cloth cap, a dingy wool-colored greatcoat, and cowhide boots. He was a great consumer of meat, usually carrying his dinner to his work a couple of miles past my house — for he chopped all summer — in a tin pail; cold meats, often cold woodchucks, and coffee in a stone bottle which dangled by a string from his belt; and sometimes he offered me a drink.

Thoreau leaves us hanging, and we are never enlightened as to whether he took Therien up on his kind offer. But in later passages, we see that Therien had a deeply ingrained coffee-drinking habit.

In the winter he had a fire by which at noon he warmed his coffee in a kettle,” writes Thoreau; “and as he sat on a log to eat his dinner the chickadees would sometimes come round and alight on his arm and peck at the potato in his fingers; and he said that he “liked to have the little fellers about him.

Of Therien, Thoreau later asks, “Could he dispense with tea and coffee?” Therien may have drunk coffee as a daily social routine, or may well have been something of a caffeine junkie. In either event, the answer to Thoreau’s question is an emphatic “No!”

Indeed, coffee appeared to be a luxury craved by many Concordians of the most modest means. Thoreau purchased the shanty of an Irish railroad laborer named James Collins and used the boards to construct his Walden home. Early in Walden, Thoreau describes the scene inside the shanty he was soon to purchase, and passing the Collins family on the road after the purchase:

There was a stove, a bed, and a place to sit, an infant in the house where it was born, a silk parasol, gilt-framed looking-glass, and a patent new coffee-mill nailed to an oak sapling, all told.

One large bundle held their all — bed, coffee-mill, looking-glass, hens — all but the cat[.]

Thoreau’s aversion to coffee seems more economically principled than a matter of taste; we cannot tell whether he joined Therien in his daily coffee drinking routines, but Thoreau has an evident concern about the extremes to which his poorer neighbors will undergo to sustain their coffee drinking habits. Thoreau describes another Irish neighbor, John Field, as “an honest, hard-working, but shiftless man plainly,” and Thoreau tried to impart a want not, waste not mentality to Field:

“I tried to help [Field] with my experience,” says Thoreau, “telling him that he was one of my nearest neighbors, and that I too, who came a-fishing here, and looked like a loafer, was getting my living like himself; that I lived in a tight, light, and clean house, which hardly cost more than the annual rent of such a ruin as his commonly amounts to; and how, if he chose, he might in a month or two build himself a palace of his own; that I did not use tea, nor coffee, nor butter, nor milk, nor fresh meat, and so did not have to work to get them; again, as I did not work hard, I did not have to eat hard, and it cost me but a trifle for my food; but as he began with tea, and coffee, and butter, and milk, and beef, he had to work hard to pay for them, and when he had worked hard he had to eat hard again to repair the waste of his system — and so it was as broad as it was long, indeed it was broader than it was long, for he was discontented and wasted his life into the bargain: and yet he had rated it as a game in coming to America, that here you could get tea, and coffee, and meat everyday.”

A well-paid IT worker today probably needs to think less about the bite the daily cappuccino puts into his budget than John Field had to worry about the financial burden his coffee-drinking placed on him. Still, those who drink several cups of coffee each day to endure the grind of work may be wise to consider Thoreau’s thoughts on how one can become enslaved by his love for coffee. But Thoreau had a more spiritual opposition to coffee which he later describes vaguely.

Like many of my contemporaries, I had rarely for many years used animal food, or tea, or coffee, etc.; not so much because of any ill effects which I had traced to them, as because they were not agreeable to my imagination.,” says Thoreau. “The repugnance to animal food is not the effect of experience, but is an instinct. It appeared more beautiful to live low and fare hard in many respects; and though I never did so, I went far enough to please my imagination.

Again, we see not an actual distaste for coffee so much as we see an aversion to what it represents – a luxury imported from foreign places beyond Concord’s borders, an expensive taste that ultimately drains the time and financial resources of those who enjoy it and are unable to deviate from the routine of consuming it.

The Drink of Champions

I believe that water is the only drink for a wise man; wine is not so noble a liquor; and think of dashing the hopes of a morning with a cup of warm coffee, or of an evening with a dish of tea!

Perhaps no better passage in Walden summarizes Thoreau’s emotions about coffee. True to his entire philosophy of living deliberately, Thoreau believed that the Spartan world about him offered him nearly everything he needed – dependence upon purchasing goods from neighbors or luxuries imported from afar was a dangerous and imprisoning habit. He appeared to have little aversion to being an occasional social coffee drinker, especially if the expense was incurred by his company. But joy and contentment, in Thoreau’s Walden world, were something to be drawn from his surroundings.

From Walden alone, we cannot determine whether Thoreau viewed coffee as a vice to be resisted for the more ‘natural,’ or as a luxury unworthy of its expense. Were he living simply today, we can feel assured that a visit to his abode would be a strictly BYOC (Bring Your Own Coffee) affair, and it is a mystery whether he would join us for a cup. Regardless, he has given us some food for thought on our favorite drink, and INeedCoffee.com salutes him as the (Anti?) Coffee Achiever.