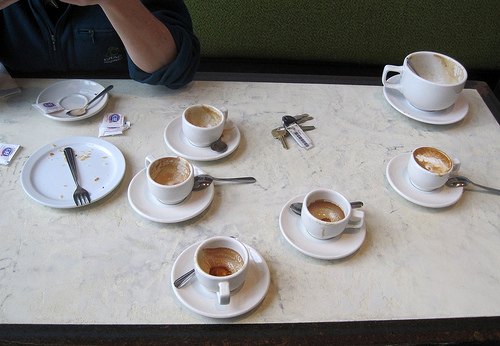 You would be hard-pressed to find another beverage besides coffee whose health benefits or concerns are more controversial. It seems with each passing year, coffee is hailed as either medicine or poison, but this year it seems the findings have been positive. Let’s take a look at a few recent conclusions.

Coffee May Prevent and Treat Alzheimer’s

In a study on mice, researchers gave them the equivalent of 3-5 cups of strong coffee and found that after two months the subjects had a greatly improved memory. It may be because the caffeine reduces inflammation in the brain, which would improve memory, or because they had 50% less amyloid-beta protein in their brains. Testing the memory of a mouse, what an interesting job.

As for studies on humans, the lead researcher on the project, Miia Kivipelto, a professor at the University of Kuopio in Finland and at the Karolinska Institute in Stockholm, said, “Middle-aged people who drank between three and five cups of coffee a day lowered their risk of developing dementia and Alzheimer’s disease by between 60 and 65 percent later in life.” She also said it remained unclear exactly how moderate coffee drinking helped delay or avoid the onset of dementia, but pointed out that coffee contains strong antioxidants, which are known to counter Alzheimer’s.

Previous studies have affirmed that high consumption of coffee may lower the risk for type 2 diabetes, and now another study on 15 overweight men was performed, focusing on two specific compounds found in coffee, chlorogenic acid, and trigonelline. The researchers examined the effects on both glucose and insulin concentrations and found a significant reduction in glucose and insulin 15 minutes after the oral glucose tolerance test, a two-hour procedure commonly used to diagnose diabetes. They believe that these specific compounds contribute to the overall beneficial effect of coffee on the development of type 2 diabetes.

Now researchers have shown that caffeine applied topically to the skin effectively protected skin cells after they were exposed to UV radiation. The reasoning behind it is believed to be that caffeine causes apoptosis, the programmed death of precancerous cells.

In an observational study, it was found that patients with a hepatitis C virus infection who drank three cups or more of coffee per day appear to be less likely to suffer from the progression of liver damage caused by the disease. In the study, those who drank 3 or more cups of coffee per day had livers that were much healthier than the other participants.

At the 13-month follow-up, outcome rates continued to decrease more for those who consumed three or more cups per day than those who drank little or no coffee, leading researchers to claim that “coffee consumption may slow the progression of fibrotic liver disease” (the result of the liver forming excessive fibrous connective tissue).

Decaf Coffee Could be Boon to Diabetics – From Coffee Chat News.