You are here: Home / Brewing Coffee / Choosing My Coffee Maker 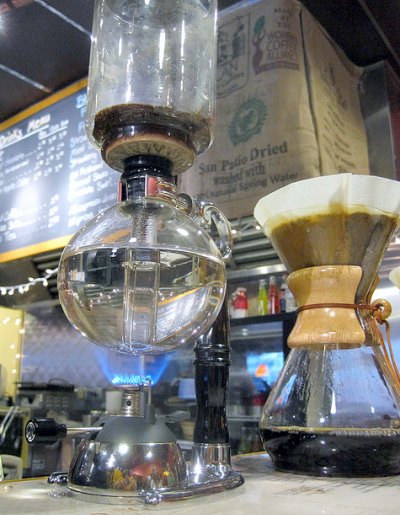 There are several brewing methods since the discovery of coffee, and the method chosen is a matter of personal preference, based on the:

For now, the most popular method of making coffee is the drip method, where water is poured over the coffee grounds in a filter above the carafe. This method offers convenience, the ability to make many cups at the same time and keep them warm if the carafe comes with a hot plate or warmer.

Next in popularity is the French press, where hot water poured over coffee grounds is set to steep for 3 to 5 minutes before the filter is pressed down to separate the grounds from the coffee, depending on the preferred strength of the coffee brewed. As this method uses meshed metal filter instead of a paper filter used in the drip method, it is able to keep the essential oils in the brew, making one of the strongest coffee among the brewing methods, especially when the steeping time is long. Note that most drip brewers today come with a plastic filter to do away with the paper type.

The vacuum pot method of making coffee carries the most esthetic values, attributed to the beautiful design of the brewer and the brewing process which is both entertaining and fascinating. The brewer is made up of two glass “bulbs” placed on top of each other with a rubber seal and filter in the connection. Water is filled in the lower bulb while the coffee grounds are poured into the upper bulb. The setup is then placed over a heat source where heated water will flow upwards to mix with the grounds in the upper bulb until a vacuum is created in the lower bulb. During this time, the mixture will be stirred to maximize the extraction. When the heat source is removed, the vacuum will suck the brewed coffee down into the lower bulk, thus ending the brew. Coffee brewed using this method is usually rich and clean of sediments as compared to the French press method. This is the most commonly used method in cafes and restaurants.

The stove-top Moka brewer works similar to the vacuum method except that the coffee grounds are packed in a filter compartment in between the top and bottom metal chambers whereby heated water will force through the grounds via steam pressure for extraction. The brewed coffee will reach the top chamber and pour out through the spout on top. This method is commonly used to make the traditional espresso since extraction is achieved through steam pressure. 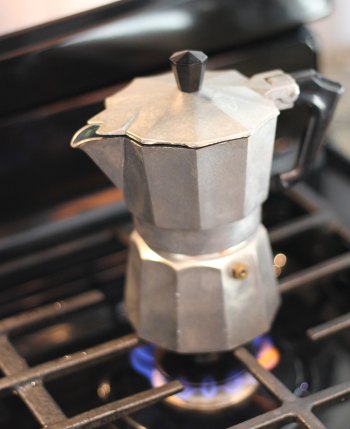 The Neapolitan flip-drip brewer is quite similar to the Moka method but stops short when the water is boiled. Instead of relying on steam pressure to force extraction, the brewer is flipped upside down and hot water will drip through the coffee grounds and the final coffee is collected in the bottom chamber.

The pour-over method is one of the simplest methods of making coffee. Hot water is poured directly over coffee grounds in a filter slowly to maximize extraction. Though simple, it requires skill in order to make a good cup of coffee.

The last method of brewing, the cold-water method, defies the normal procedure whereby cold water is slowly dripped into a large number of coffee grounds such that the resulting brew takes around 8 to 12 hours to extract. The strength of the brew depends on the dripping rate, grind size of the grounds, and the ground amount to control the rate of the water flowing through the grounds. The cold water coffee brewer looks similar to the vacuum brewer but no heating is required and the chamber containing the grounds tends to be bigger to accommodate much more grounds than the vacuum method. The coffee brewed in this method is concentrated so it is normally served either in a mixture with water or ice-blended with milk.

The above brewing methods are commonly used in the home environment, while in a commercial setup, coffee is usually brewed in batches using the drip method or if individually brewed, then the vacuum brewer is used for its esthetic appeal and cleaner cup. Except for the espresso brewing method where the machine is differently built for home and commercial requirements, there is really no difference in quality for coffee brewed at home and in cafes using the same method, assuming proper skill or procedure is followed.

Even with the advent of new brewing technology and methods, such as the Clover commercial single-cup brewer for business and the Aeropress for a home setup, the basic principle of brewing remains the same, thus it is possible to make a great cup of coffee at home. The difference or the main advantage of the commercial brewer lies in the control, consistency, and repeatability capabilities of the Clover in making consistently good coffee with the same taste profile cup after cup, and this is a major milestone in commercial brewing. And another key differentiator of Clover is its single-cup brewing approach that allows brew-on-demand, just like making espresso.

With the above short explanation of each brewing method, the following table attempts to summarize the pros and cons of these methods in relation to making a single cup, to our best knowledge and unbiased evaluation. Note that the Turkish brewing method using an Ibrik is not mentioned here because it is a rarely used method, except for its Ibrik pots that are more of a collectors’ item among coffee lovers.

At the end of the day, appreciating a good cup of coffee does not require a big crowd. Coffee is a personal thing that requires peace of mind and the environment to sieve out the nuances and delicate flavors of the blends and origins. A demitasse or a tasse at most is all that will make your day complete and satisfying.

Malcolm Pang
Malcolm Pang is the founder of The QARR Coffee, the first online coffee appreciation and retail store based in Singapore.