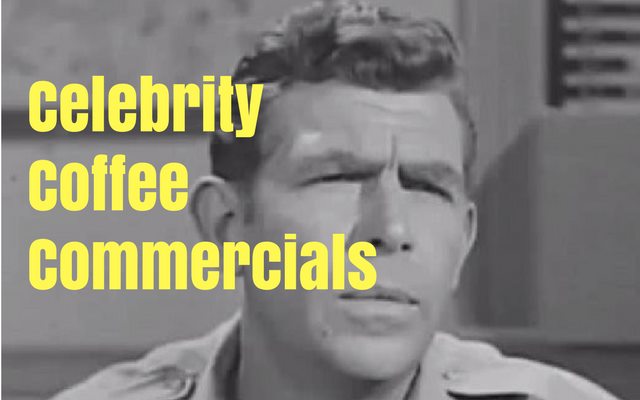 Recently, I was feeling a little nostalgic and trying to remember the jingle from the Chock full o’ Nuts coffee commercial from the 1970’s. My mom used to add coffee to my milk when I was a kid because I loved the taste so much. My love affair with coffee still continues today. I love the taste, and in moderation, I love how it makes me feel.

Thanks to YouTube, I was able to find the Chock full o’ Nuts “Heavenly Coffee” jingle as well as a bunch of unusual, sexist, and entertaining coffee commercials featuring various celebrities, across several decades, and shot in different countries.

This is a commercial for Instant Maxwell House with Andy Griffith and Ron Howard from the 1960’s. This reminded me of a time when there were only seven channels to watch. “The Andy Griffith Show” was one of my regular programs, but mostly because there was nothing else on.

Here’s a sexist Folger’s commercial from the 1970’s starring Stephen Collins very early in his acting career. Quite the different persona from his “Seventh Heaven” t.v. show from the 90’s.

Here’s a youthful Scott Bakula for Decaffeinated (ugh!) Folger’s coffee. I’m hoping that he was able to “Quantum Leap” to a real cup of coffee after shooting this commercial.

These celebrity coffee commercials were shot in other countries, where well-known American actors could hopefully avoid public scrutiny and potential nicks to their careers.

The road to stardom for many successful actors seems to have been paved with hard work, humbling resume-building jobs, and lots of coffee grinds!

YouTube surfing down memory lane satisfied my nostalgia, cured my mental block for the “Heavenly Coffee” jingle, and provided me with a small cup o’ caffeinated entertainment.

Sue Zeger
Sue is the creator of Sue's Infinitees, which are t-shirts that are designed with themes that she's passionate about - including coffee!

Sue is transitioning from designing t-shirts by hand - painting a little bit of bleach on an original stencil - to unique and fun screen printed designs.