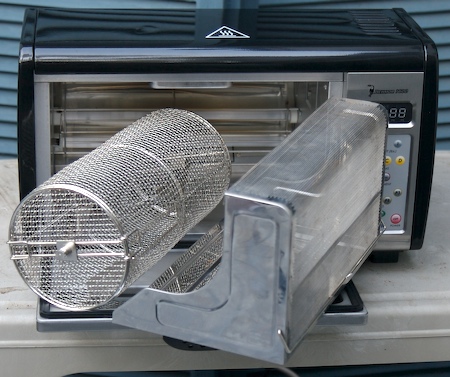 Maybe you’ve been hearing about the new roaster by Joe Behm. Maybe you heard it under other names, like the Joe Roaster. Maybe you have been hearing about it for so long, that you actually forgot about its existence. Well, the Behmor 1600 (official name) has arrived. At the SCAA show in May 2007, this roaster was awarded the prize for Best New Product. I have given it a cursory look, and hope to share some of my initial findings with you.

The first thing I thought when using the Behmor was: This thing is quiet, and it is pretty small. And those are both true even after 2 weeks with the machine. The quiet part is a boon to anyone that wishes to listen for 1st or 2nd crack. A small footprint is always a good thing for obvious reasons. 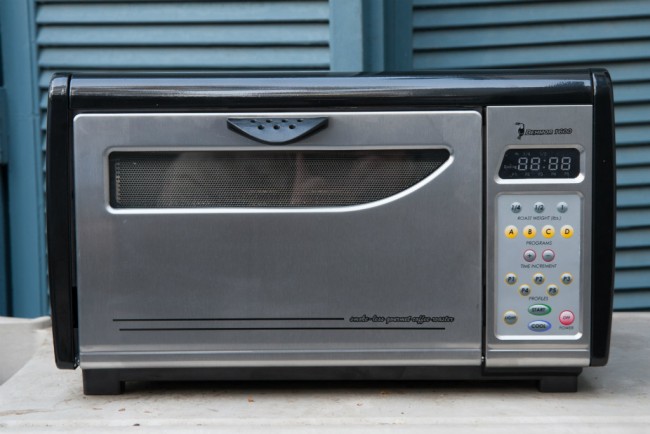 I selected Brazil Daterra Yellow Bourbon, and Malawi Mapanga as my Green Coffee Bean selection. I found that 10 ounces was my batch size of choice, and resulted in about 8 ounces of roasted coffee after moisture loss.

I tried all profiles initially using the 1/2 pound setting. There were some problems though. Some profiles (P1 and P2) roasted so quickly that the first and second cracks ran together towards the end. Other profiles (P3, P4, P5) simply did not give me enough time to get into the second crack (the longest time allowed was 15 minutes). There was nothing I could do about P1 and P2 since the profiles were already programmed in, so I did not use those at all. However, with P3, P4, and P5, I felt I just needed 2-3 minutes more, because I had ended, or was nearing the end of the first crack at the 15-minute mark. I realized eventually that just selecting the 1 pound setting allowed me much more time, and does not change anything other than the max allowed time. It turned out that with P3 and P4 I got about 18-minute roasts where I was just coasting into 2nd crack, and there were about 2 minutes between 1st and 2nd crack. P5 for me “baked” the beans a little, so I avoided it.

If a roast falls outside the roast time max it can mean low voltage. Try plugging the roaster into a different outlet or trying roasting at a different time of day. 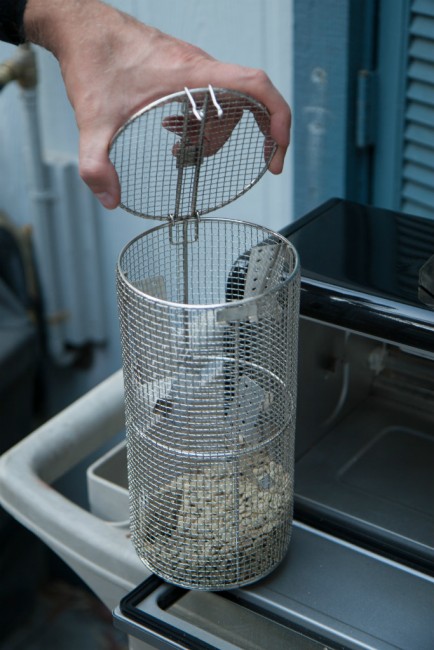 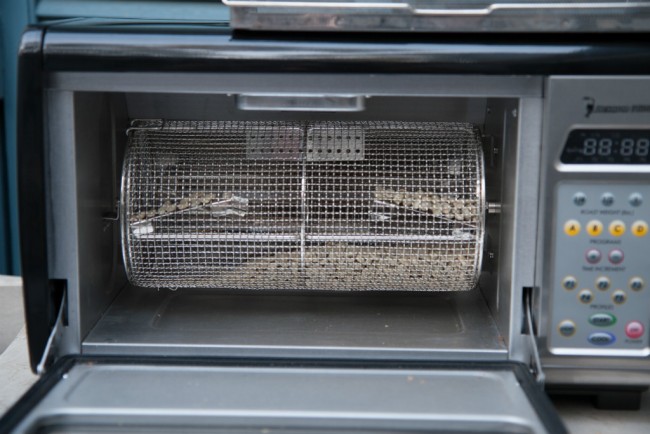 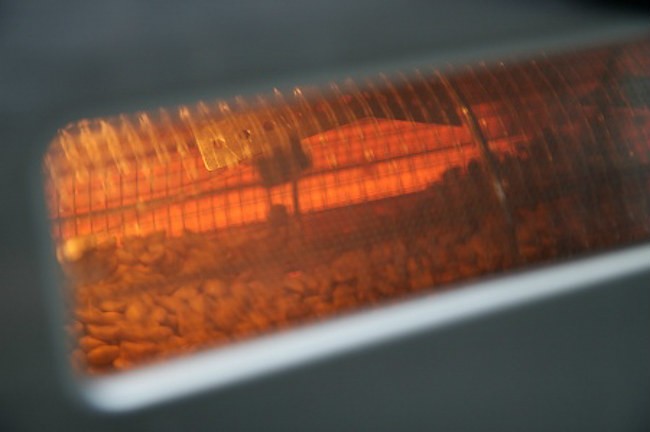 The cooling cycle is about 13 minutes. Too long you say?, well I found a trick that works well. After about 2 minutes, just open the door. Everything is cool enough to touch within about another 3-4 minutes, and the first 2 minutes with the door closed allows the electronics to cool down. If you had gloves, you could even pull the drum as soon as you open the door. Either way, cooling is acceptable to me.

The chaff collector works well, and there is usually a small handful of chaff leftover inside the machine. I blow out the chaff the old-fashioned way, but there is an optional clean-up brush listed in the manual. Not sure how much that upgrade will run you, but I would think a $.19 wide paintbrush could do the same thing. 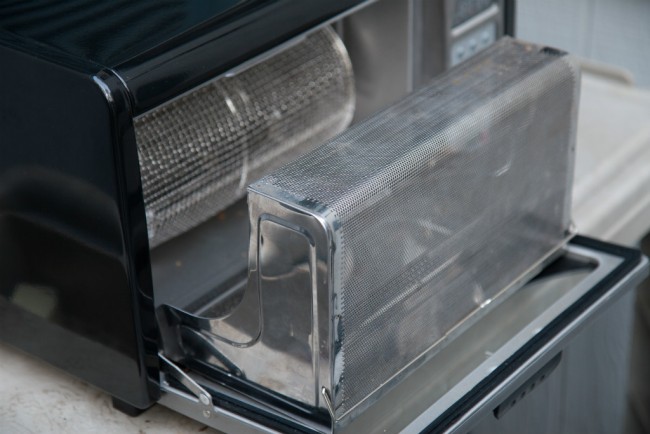 Once I got the roast where I wanted it, I tested the beans for flavor using both drip and espresso. I have to say the Malawi Mapanga had some berry notes on day 2 that I had never gotten with the GeneCafe or the iRoast2. Overall, the roasts were very nice and somewhat better than my GeneCafe.

Five Roasting Profile Curves are pre-defined and cannot be changed, though they are decent, and graphs are provided in the manual. This roaster is not for the Uber Geeky Coffee Nerd. It is customizable within defined limits. If you run Linux or even know why a PID would have anything to do with coffee equipment, you might want to pass. Or better yet, this might be your opportunity to void the warranty, mod this bad boy, and add Bluetooth and WiFi just for the fun of it. 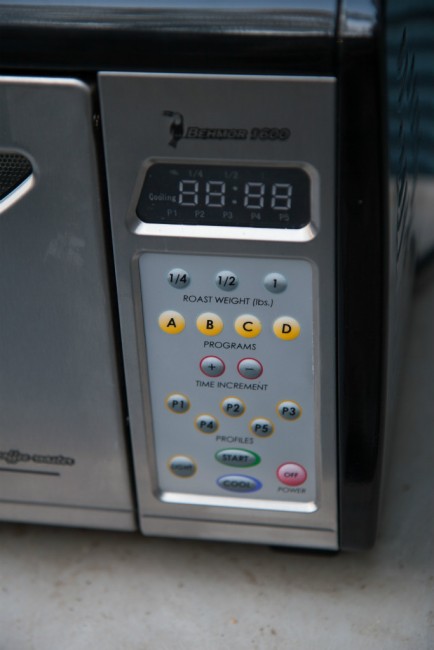 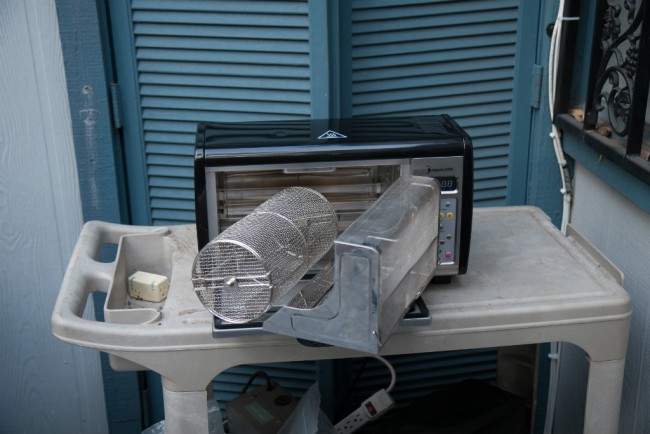 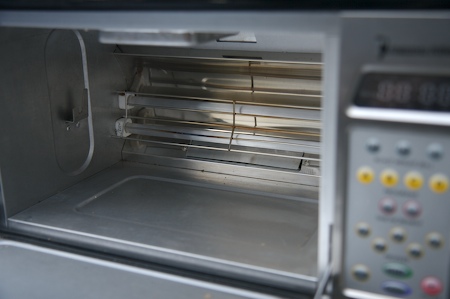 inside the Behmor Coffee Roaster

The manual is an interesting read, to say the least. It could definitely use a rewrite, but will get you up and running, and explains most of the features. As a guy, I find it easier to use the equipment first and only go to the manual in emergency situations.

The drum clasp and lid are not the smoothest things in the world, and in one case the lid was opened “too far”, and I could not get it back without a lot of force. All in all minor, but worth mentioning.

Some in the past complained about the loading of the drum. I found it fairly easy after a couple of times, but it takes some getting used to.

The cleverly provided light allows you to see the beans without opening the door. However, the viewing glass gets “fogged up” after a few roasts, presumably with coffee oils or moisture. To improve visibility, keep the glass cover cleaned.

The only thing the different weight settings do is increase max time for a given Profile (not officially stated anywhere).

If you try roasting a second batch after the first batch, none of the buttons respond, nothing happens. In order to roast again, you have to power off first. According to the company, this was done because the unit was not meant for commercial usage and an ordinary customer would rarely need to roast back to back.

Smoke-less does not mean what you think. If it said “smokeless”, that would mean without smoke. However, “smoke-less” means that you will get less smoke. Less than what? Not sure, but unless you reach well into 2nd crack, the smoke is very, very minimal. I roast outside, so I cannot comment on whether I would roast in my living room, but I think you could probably roast in your garage without the wife screaming at you (that is for you poor cold weather bastards). 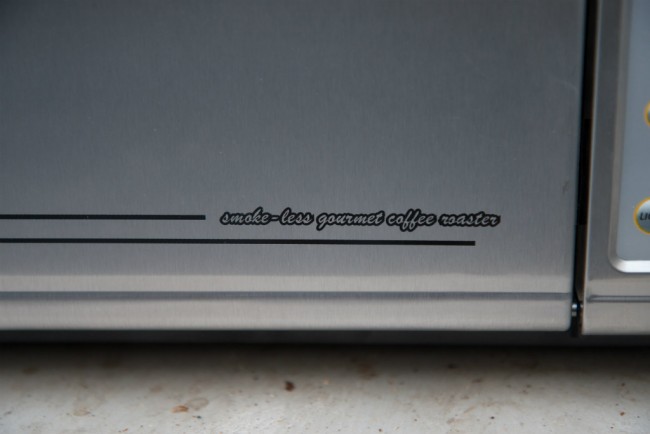 The Behmor 1600 Coffee Roaster is most closely compared to a Gene Cafe ($499), at least in resulting flavor, as well as roast and cooling times. Of course, the heat generation and agitation methods are different. I liked the price of the Behmor, and I really liked the resulting roast. At a suggested list price of $399 (resellers will be able to offer it at a substantially lower price), the Behmor 1600 is worth a long, hard look.

Behmor 1600 Coffee Roaster Tutorial – Our follow-up tutorial on the Behmor 1600.