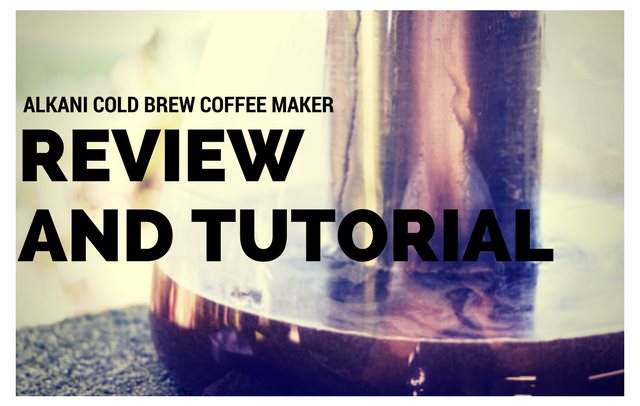 One of the great things to happen in home coffee brewing in recent years has been the innovation in cold brew coffee gear. What do I mean by innovation? After all, a cold brewer doesn’t require power or need to maintain a specific temperature. A cold coffee brewer is simply a vessel for letting ground coffee make contact with water for 12-24 hours. The innovation is making this process easier to get started and easier to clean up.

Back in the day the only non-DIY (do it yourself) option for cold brew coffee was a big old Toddy plastic bucket with that weird pad-like filter that needed to be cleaned and then replaced after every 10 or so uses. And it was fine for the time, but things are better now. Today you can purchase cold brew coffee makers that are glass, use metal filters and are both easy to setup and easy to clean up.

The Cold Brew Coffee Maker from Alkani is the latest example of a cold brew coffee maker that gets it right. The brewer uses a sturdy glass container which serves as both the brewer and the pitcher to store the brewed coffee. Along the side, you have volume markings indicating how much coffee is in the pitcher once the brew is complete. The Alkani has a thin metal filter with a handle, which makes it easy to remove once the brew is complete.

Step by Step Tutorial for the Cold Brew Maker by Alkani

Let me show you how easy it is to make cold brew coffee with the Alkani.

No need for scales. Just grind 1 to 1.25 cups of coffee medium-coarse to coarse. See our Coffee Grind Chart for a visual explanation. I found that 1.25 cups is enough to fill the metal filter. I’m using a lighter roast. Darker roasts might take a few more beans, as coffee expands and becomes lighter in weight during the roasting process.

There is a metal ring with a rubber edge that serves as a collar to hold up the filter during brewing. Make sure it is in place. Once it is in place, lower the metal filter into the coffee maker. 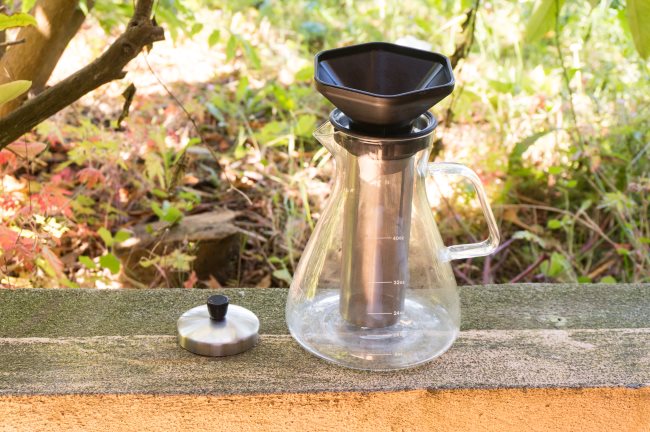 I placed my AeroPress funnel over the Cold Brewer to prepare for the next step.

This is actually the hardest step since you need to aim the grounds into the opening, but it really isn’t hard. Just get a funnel. I discovered the AeroPress funnel is the perfect size for loading up the cold brew filter with coffee grounds. If you don’t have an AeroPress funnel, you can roll up a piece of printer paper and hold it together with a piece of tape. 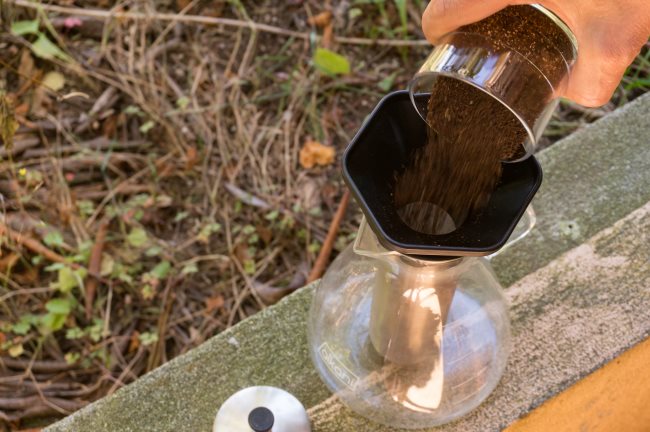 #4 Slowly Add Water Until the Grounds Are Covered 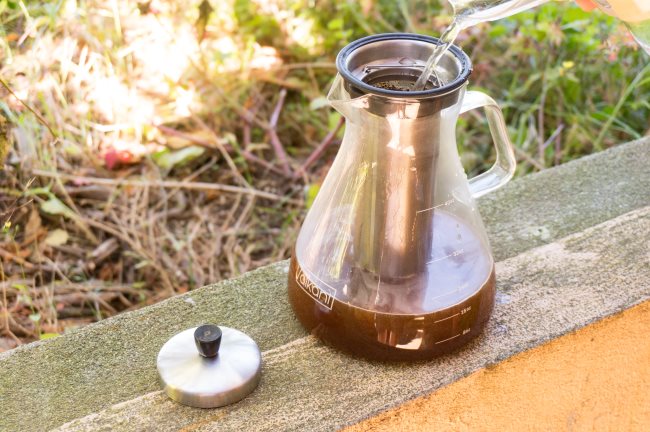 Let the coffee brew sit for 18-24 hours. I use my kitchen counter, but you could also place it in the refrigerator. 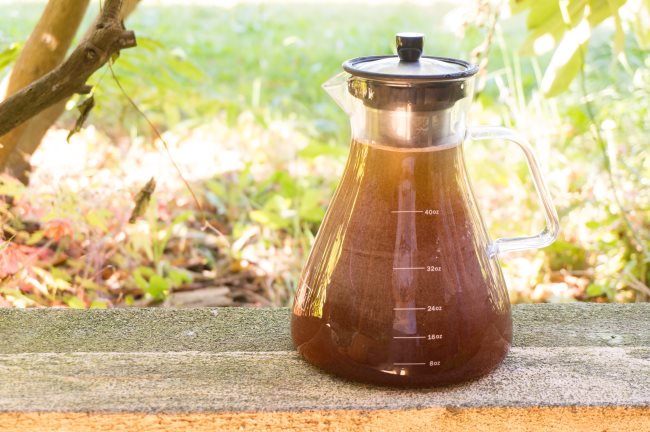 When you remove the filter, some coffee will leak, so do this step at your sink. Place the filter in your sink and then either serve or store the finished coffee in the refrigerator. Later you can go back and empty the coffee grounds into a compost bin. The only step left is to clean your equipment so it is ready for the next brew.

Shortly after publishing the tutorial on the Cold Brew Coffee Maker from Home and Above, a bag of groceries tapped my brewer and it tipped over on the counter, rolled and then crashed to the floor. Glass everywhere. I believe had that happened to Alkani, it would not have tipped over and rolled onto the floor because the weight is mostly in the base. (The brewer was empty at the time)

The metal filter from Home and Above is thick and more sturdy, but it doesn’t impact the quality of the brew. I have used that filter since to brew directly into a mason jar.

I like both brewers, but between the two, I prefer the thicker bottom-heavy design of the Alkani.  If I wanted a brewer that occupied less space on the counter and in the refrigerator, I’d give the edge to Home and Above.

Cold Brew Coffee is Not Rocket Science – The basics of cold brew coffee.