You are here: Home / Brewing Coffee / A Vac Pot Primer 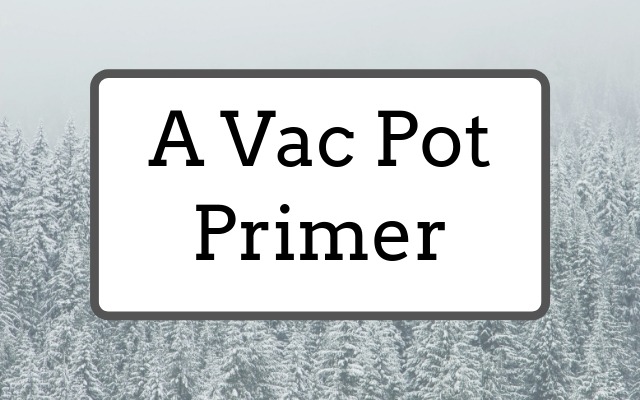 Visit any “hardcore” coffee website or newsgroup these days, and you’ll find mention of something called a “vac pot”. They also go by the names “siphon pot”, “siphon brewer”, “syphon coffee maker” and several other monikers.

So what’s this thing all about?

Simply put, it’s one of the coolest and most fascinating ways to make coffee. The bonus is that it is also one of the best-tasting cups you might ever have.

History of the Vacuum Brewer

Back in 1842, a woman by the name of Mme. Vassieux registered a patent in France for a coffee brewing device that was based on the vacuum brewing method. But she wasn’t the first. In the early 1830s, a few Berliners patented vacuum brewing machines, and Richard French copied those designs in an 1838 patent. The reason why Mme. Vassieux is often mentioned as the “inventor” of the vacuum brewer is because her machine was the first to actually make it into production, and her design is strikingly similar to those in use and made to this day.

Through the 1800s, various brewing devices based on the vacuum brewing method surfaced in Europe, including the side-by-side design by John Napier (called a Napierian), and other modifications on Mme. Vassieux’s designs. People liked the resulting coffee, but the very nature of the pressure used in these devices and the materials used (these were the days before Pyrex) sometimes made them dangerous devices. By the end of the 19th century, they started to fall out of favor. 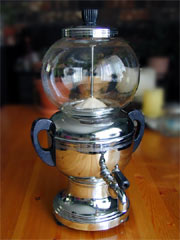 The Faberware was the first North American electric automatic vacuum brewer. This model is circa 1935. 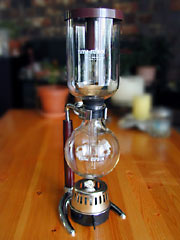 In the early 20th century, the mantle was taken up by American companies, including Silex, Sunbeam, General Electric, Cory, and more. With the invention and perfection of heat-safe glass like Pyrex, the devices became safer. Companies like Cory and Silex (and Cona in Britain) devised a glass filter pipe with a bulbous, rough middle that also eased the use of the devices. By WWII, vacuum brewers were enjoying a good run of success in the American kitchen.

In the post-war years, the vacuum brewing method, superior in almost every way, lost out to percolation and auto-drip devices because they lacked convenience and easy cleaning. Americans were all too willing to give up the superior taste for “okay taste” if it was automatic and cleanup was as simple as dumping a paper filter.

How a Vacuum Brewer works

A vacuum brewing device uses the temperature changes in water and the resultant vaporizing of water to both brew and filter coffee. The way it works is fairly simple. A vacuum brewer has two globes, one on top of the other. They are connected with a syphon tube running between them. The bottom globe which has an exit hole at the top contains the water and has heat applied to it. The top globe contains the syphon tube in the bottom, is open at the top, and holds both a filtering device (usually cloth-covered ceramic or a glass filter pipe) and the ground coffee.

When assembled and heat is applied, the water in the bottom vessel heats up, expands, and creates water vapor. Vapor (or gas) takes up more physical space than liquid, so as the vapor increases, the pressure on the glass grows, and the remaining liquid seeks to escape. The only route it can take is up the syphon tube to the top globe, through the filter, and into the coffee grounds.

Once the device is at full boil, all the water that can go up the syphon does (there will always be some water left in the bottom, as the syphon tube by design is not long enough to reach the bottom of the globe). At this point, the vapor is escaping up the tube instead of water, and this in turn continually heats the water/coffee mixture in the top globe and also creates a gentle rolling action in the mixture. This agitation helps the process and keeps the top coffee at near-perfect constant brewing temperatures – about 10F below boiling.

After about 2-3 minutes of brewing (this is a personal preference and dependent on the grind), you remove the heat source, and almost immediately, all these heat-expanded gases in the bottom globe start to contract and turn back into liquid. This contraction contains a fair amount of force.

As the vapors contract, something is required to fill the space being left in the bottom globe, and that something is your brewed coffee liquid in the top globe. It gets pulled back down the syphon tube through the spent grounds and the filter (gravity isn’t much of a help to get through those obstacles), and it is pulled down with sufficient force that it actually “vacuums” your coffee grounds once all the water has gone “downstairs”. The finish is usually a bubbling action in the bottom globe for a few seconds as air is pulled through the spent grounds.

The “vacuum” name of this brewing method doesn’t come from that particular action; it comes from the fact you are creating a partial vacuum in the bottom globe that uses the coffee liquid to fill the said vacuum.

The entire process takes about 12 minutes, including water heating, brewing, and finishing, and is very fascinating to watch.

About six months before I purchased my first vac pot, I’d heard mention of it on the Internet, and I had vague recollections of my grandmother owning a Cory Vacuum Brewer. I heard claims it was the best coffee going, but like many claims about something I’m not familiar with, I was skeptical. Around April 1999, I was in a Starbucks and noticed they were selling off their supply of Bodum Santos’ Vacuum Brewers for 40% off. I was too tempted to resist, so I bought one and rushed home.

I admit I was kind of excited by the prospect of brewing coffee with a method nearly unheard of among everybody I knew. I guess it is a tell-tale sign that I’m a complete coffee geek when I admit I was even giddy at the process I was about to witness.

Just witnessing the process for the first time is hard to describe. Remember how cool (or secretly cool) you thought some of the little experiments were in your Grade 10 Physics class? Like when your teacher would do things that go contrary to conventional thought, made things happen that you didn’t think would happen? A vac pot is like that. The very aspect of water traveling against gravity is hard for people to normally imagine. You always think about water traveling downstream, down a pipe, heading for lower ground. With a vac pot, water meets something stronger than gravity: pressure. This forces the “trip north” as I’ve coined it, up to the top globe.

Then when heat is removed, the “trip south” occurs but occurs with enough force that it literally vacuums your grounds dry. The grounds in the top vessel end up with little craters in them, which is kind of cool to see, and definitely indicates complete extraction of your precious brew. I think everyone’s first time with a glass vacuum pot is a similar experience – they can’t get over how cool it looks, forgetting for a moment that the just brewed probably the best coffee of their lives. 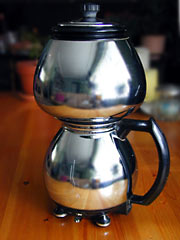 Sunbeam ruled the automatic vacuum brewer market from the 1940s to the 1960s with their CoffeeMaster series. Unfortunately, the coffee produced wasn’t as good as manual devices. 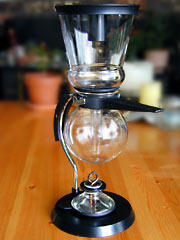 Vacuum Brewers Today and Beyond

During the 1990s and beyond, vacuum brewers are enjoying a bit of a renaissance. Not enough to make them even faddish yet, but enough to make them relatively easy to find and add to your household. Companies like Bodum, Cona, Hario, Tayli, and Yama all make vacuum brewers today, and some are pretty economical (Yama models can be had for $35 new, Bodum Santos models for $35-40). They come either ready for your stovetop or self-contained with alcohol or gas burners. They come in a variety of sizes, from 1-cup models from Hario (that makes 8 ounces) to 8-cup models from Cona. And you can pick up some of the mid-century Cory, Silex, Sunbeam, and GE models on eBay for reasonable prices, as long as you don’t expect absolute mint quality (the rare mint ones can cost quite a bit).

During the first decade of the 21st Century, I believe this renaissance will continue with either the revival of some long-defunct vacuum brewer makers or new companies forming to manufacture and sell these unique brewing devices. You can thank (or blame) this primarily on Starbucks, which has played a huge part in waking middle America up to coffee that is at least better than the coin-op machine at the gas station. Quality coffee is seeing a full-blown revival and I believe in some small way, vacuum brewing, which is arguably the best possible way to make brewed coffee, will ride the crest.

Mark Prince
Mark is the coffee guru behind coffeekid.com and CoffeeGeek.com.